We previously put together and published a video which looks at what it actually means to have a voiceover professionally edited, however we also wanted to share examples of what the audio sounds like pre and post editing.

It’s important to understand what difference a professional edit makes and there’s no better way than to compare audio samples side by side.

Professional microphones will pick up even the smallest of sounds, such as the rustle of a script, the rubbing of clothes or even the squeak of a seat and, whilst many noises can be removed during the recording session, this isn’t always possible, especially when studio time is limited, and you’ll often find that some noises find their way onto a track. In addition to these unwanted noises, many voice artists have a sibilant voice which creates an ’S’ sound upon recording.

As such, professional editing will include reducing the volume of breaths, removing mouth noises, changing the length of pauses in the recording, removing mistakes and even splitting a session into multiple tracks and adjusting the level of silence at the start and end of each.

One question which many have, however, is what does a professionally edited voiceover recording sound like when compared with an unedited track?

Before a Professional Edit

If you take a listen to the above audio sample here, you’ll hear a raw take before professional editing, where you can hear slight sibilance and mouth noises. Whilst to many this would sound a well-recorded, usable audio track, there’s clear noise and it would be unlikely to meet the requirements of producers.

When you listen to the same track after an edit you can really hear the difference and appreciate how a professional edit can transform a track.

After a Professional Edit

If you listen to the second audio sample, you’ll hear the same track here, albeit after being professionally edited. The difference is instantly noticeable, with a significant reduction in sibilance and voice noise. Overall, the track is far clearer and one which you would expect to be classed as a ‘ready-to-use’ recording.

To further showcase the problems faced with unedited audio, our engineers have shared a spectrogram view of the above ‘before’ audio track, instead of a regular waveform view, where clicks and noise have been highlighted. This better showcases these noises to visualise what it is that needs to be removed by the engineer during a professional edit.

Please visit: Hear the Difference: Before & After Professional Editing of a Voiceover

How to choose the right voice artist for your project 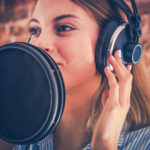 The power of animated explainer videos to capture audience’s attention

Is your #GBBO knowledge worthy of a Hollywood Hand...

In series 4 of #TheCrown, Gillian Anderson gives a...